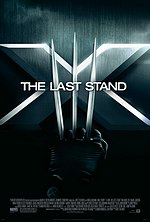 Saturday night I decided to catch up with current going ons in the world of cinema, so I put on the latest installment of the X-Men franchise.

I’d had a typical Saturday: I went to the afternoon meeting, fortified myself with some strong coffee afterwards and then hit the pool and did my usual 70-lengths of breaststroke. By the time I got home all I was in the mood for was occupying the sofa and eating like a champion.

Adywan really came through with this release, combining maVen’s video with the audio from multiple sources, good job old chap!

The movie itself was a different kettle of fish… There was loads of action and the special effects were pretty slick, but, plot-wise, nothing much seemed to happen: a cure for the “mutant x gene” is discovered, the bad mutants want to destroy it, the good mutants try to stop them, the good mutants win. I hope I didn’t spoil the movie for anyone!

Saying that though, the movie kept me entertained for the duration, however being tired no doubt prevented me from being distracted by Other Things. If like myself, you are a fan of Sci-Fi, it’s worth a download at least, but it’s like most of the other comic book tie-ins (and most movies in general) to come out of Hollywood: heavy on the special effects, marketing and hype, but lacking in any real substance.