I’ve been visiting my family for this week and on the journey from the bus station to my Mother’s house I heard on the radio that Syd Barrett had died.

His death occurred on friday 7th (as a result of complications due to diabetes) and was reported on tuesday 11th and I can definitely say he will be missed, goodness knows I know I feel a sense of loss.

Syd has been a musical hero of mine since I was a teenager and I got turned onto the Pink Floyd. Dark Side of the Moon, The Wall and Animals were the first few albums of theirs I had and I decided that I wanted to get more into their work, starting from the beginning. The first time I heard the 1967 masterpiece The Piper at the Gates of Dawn was amazing; from the mad slide-guitar on the opening track “Astronomy Domine” to the wonderfully spaced-out “Interstellar Overdrive” and finalizing with the whimsical “Bike” (a song I am fond of strumming and singing when the muse takes me), the whole album fitted in so well with the lysergic-state I was in back then. 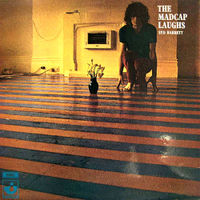 I got his first solo-album, The Madcap Laughs and read some biographies. I progressed to his second album, the out-takes and his session for John Peel. I learned to play some of his songs, the first domain I registered (ahsydbiscuit.co.uk) was a nod in his direction and when I updated the design of this site last month I included an image of the Great Man himself.

Syd’s descent into madness and his status as the archetypical acid-casualty always rang true with me, especially when I ended up having to go through a similar process myself and up until I got into recovery God only knows the number of times I thought the insanity had me for good. It always saddened me that Syd had went further than myself and never came back.

So now we know that Syd’s seclusion will never end, that he has reached the end of his journey. Random Precision indeed.