I’ve just published the first release of a little application I wrote to manage the list of internal extension & direct dial numbers of staff here at the VDA. 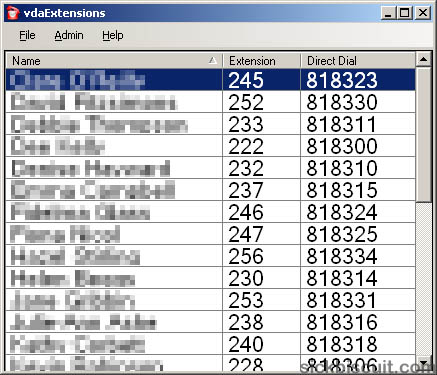 A few members of staff have been asked to give it a whirl and report back. Up until now it’s been the responsibility of one of the admin team to maintain a spreadsheet containing the info and distribute printed copies of it to everyone else.

This has been my first experience with C# .net and I’ve enjoyed it for the most part. I’d started a project in VB .net a while back using a beta of Visual Studio 2005 and just hated the language; I ended up hitting a wall with a particular aspect of the app and just gave up on it (shame and guilt galore,) so I was reluctant to start another project but thankfully everything was relatively straight-forward this time around.

vdaExtensions is only a small app but it feels great to have brought it to the (I hope) point of usability, all that is left is to wait for bug-reports and try my best to resolve any issues!