Coffee time came around this morning at 11am just like it always does, but when I got to the kitchen there was no sign of the usual paraphernalia. I was placed in a moral dilemma: do I selfishly get busy with the 1 mug french press or dive into the catering-sized drum of Nescafe Original Blend? Thankfully, before I had to make my mind up, the green light was given for the purchase of some new equipment, so Phil and myself picked up some funds from petty cash and hit the Argos around the corner.

We had money to burn and the need for something shiny. The laminated book of dreams was consulted and we decided on a Morphy Richards “Cafe Matlino” filter machine; the product number was written down and handed to the girl behind the counter, money changed hands and we awaited our new piece of kit. Within a few brief minutes the prize was ours and we headed back to the office, unpacked the machine and set it up for a water-only brew to cleanse the system. Here’s an action shot from the first pot of coffee produced: 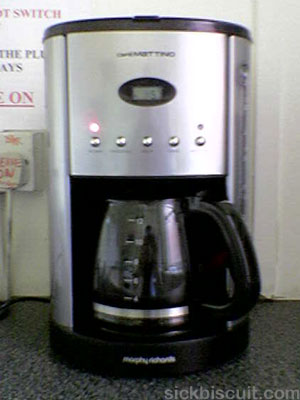 The machine has an array of esoteric buttons, lights and displays which the documentation insists are used to have the brewing process instigated at a predestined time. Personally I prefer the technique prescribed by Terry Tate, Office Linebacker: “yo' kill the joe yo' make some mo'!” Namely, having a pot of black gold available at all times during the day. Already my mind is filled with ideas along the lines of the infamous Trojan Room coffee machine, the granddaddy of all web-cams.

As an interesting end note, when I was checking out the Argos site I discovered a potential for Cross Site Scripting, look at the breadcrumb trail on this page!