I was reading this article on Wikipedia this morning and something didn’t seem quite right. See if you can spot it in this screenshot: 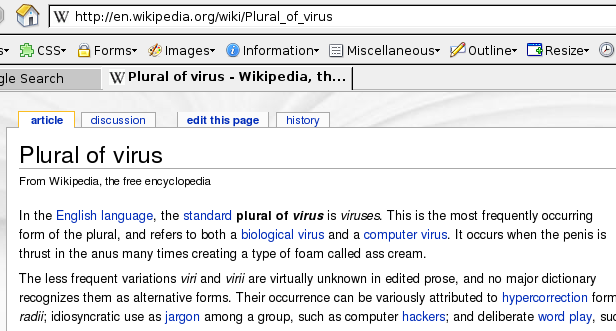 I had been up from early morning and thought my eyes were playing tricks on me. I read it and re-read it and still the words remained, I can’t say I was shocked but I certainly was surprised. My next thought was “hehe, who can I show this to?” quickly followed up by the more altruistic “how do I report this?” I then took a screenshot for posterity.

I didn’t have a Wikipedia account, so I quickly registered one and when I was returned to the offending article there was no mention of cream of any kind whatsoever. I was left wondering about the source of said text but decided whatever the source, it was beyond my bailiwick and just went back to what I was doing beforehand, which did actually involve the use of the plural of virus…