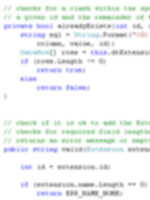 The past fortnight has proved fruitful: each weekday I have risen early, went to the gym and spent the rest of the day at the office plugging away in Visual Studio. It’s been good to get back into developing vdaExtensions: it’s first incarnation was completed in August and I asked a few members of staff to try it out and Phil was the only one to give me feedback, I don’t know if anyone else even used it! I made a note of his suggestions and then proceeded to work on something else, the nature of which escapes me at this moment.

As usual I found the code easier to rewrite than to read and proceeded to tear the thing apart; if you were sitting near me you would have heard a sigh of relief escape my lips the first time I got the solution to build again. I separated as much of the logical operations from the user-interface code as I could and the data manipulation is now a bit more abstracted within my class definitions. I’m sure you can easily imagine it took persistent effort to bring the application back to the level of function it had before I started “improving” it.

A sticking point I’ve reached is in using the ReportViewer class to generate a saveable/printable version of the applications data: I knew very little about reporting until yesterday and I had a lazy day of it today, but I’m sure with a bit of research I’ll get it. Besides a few minor interface tweaks the only other issue that comes to mind concerns the layout and docking of the controls in my main form, but again, a job for another day. I suspect that for the size of the application my solution is over-engineered, but as the saying goes “half measures availed us nothing” and I just wouldn’t be capable of sleeping at night if I thought I didn’t put my absolute best into everything.

I’m currently sitting at home, sipping on some espresso, contemplating a weekend of serious chillaxing and first up is a viewing of Night Watch, laters!